So we finished recording the other night, it was cool. The last instrument to go down was the toy piano, on “Out of the Woods”. Skye played it. 2 takes.

We did 15 songs all up, and here is a list of them, the ones in italics are our nicknames, we’re pretty crap with song titles. 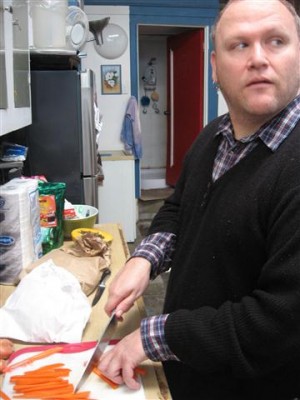 We’ll be mixing over the next coupla months, ready for a late ’11 or early ’12 release. We’ve got some photos (below) – though not many of Dan.. there’s a good one of him julien-ing some carrots, but it wouldn’t crop square like all the others, without me julienning his head out of the shot. Here it is in all its rectangular glory.

We also have a ton of video footage from various phones and cameras etc. Not sure if we’ll just chuck the raw footage up (a bunch of people making feedback on guitar, or banging a drum in the kitchen or getting the words wrong and saying “ah can you just drop me in again”) or try and do something a bit more clever. For a PC die hard I’m starting to feel tech-yearn for some macability actually, dammit.

Anyway yeah. Album’s “in the can” in its very raw form. If you wanna hear unmastered mixes as we do them, just ask. (nicely). Coming from my 20% sized wedge of the WAW2 pie I can say that my band members all fkn rock, more talent and coolness you couldn’t wish for. And the guy at the desk, Darek – the best of all, what a king. Yay aren’t we great~!